What is Audi Umluft?  Umluft means "Circulating Air"  in german.  Its an early attempt at removing turbo lag that Audi developed for their inline 5 cylinder turbo motors in the mid 80s.  The system first found use in the S1 Evolution 2 Audi rally cars of the mid 80s of Group B fame.  They look like this. 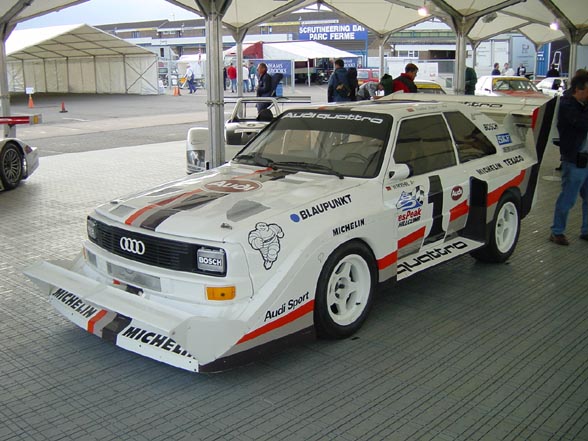 The engine bay of the S1E2 without Umluft setup. 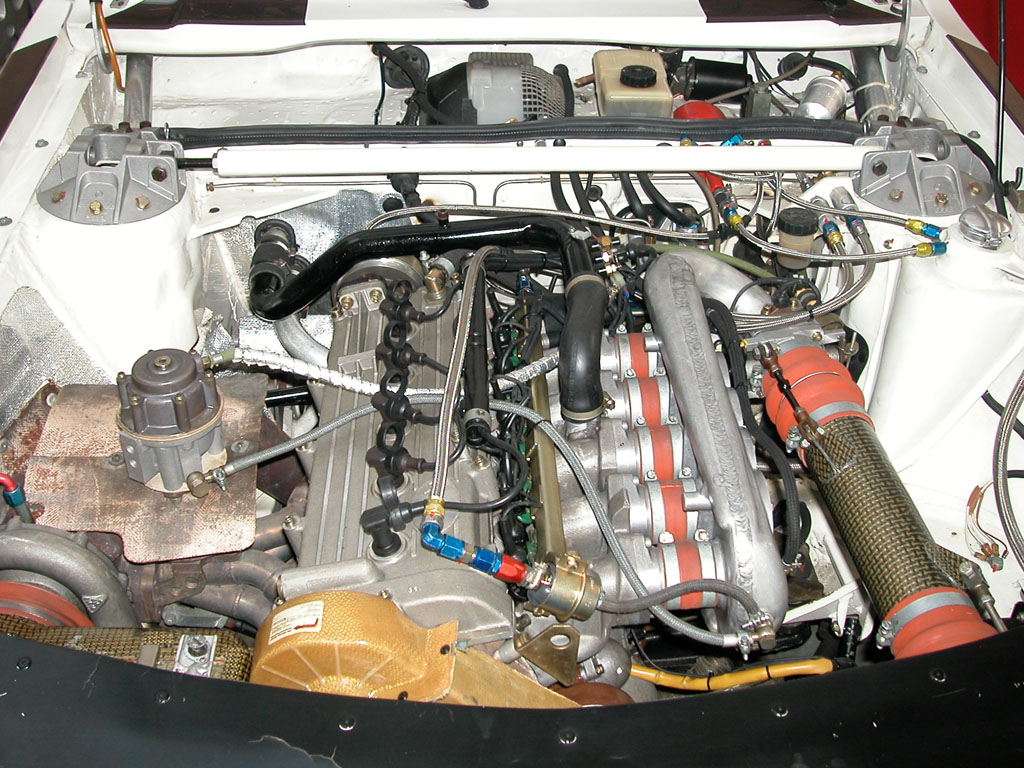 The engine bay of an S1E2 with Umluft setup. (This particular setup is still on the #1 W. Roehrl Pikes Peak car of 1987) 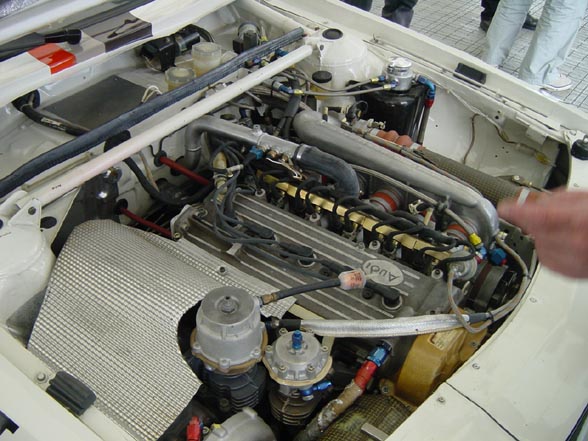 another.  Notice the 2nd wastegate. 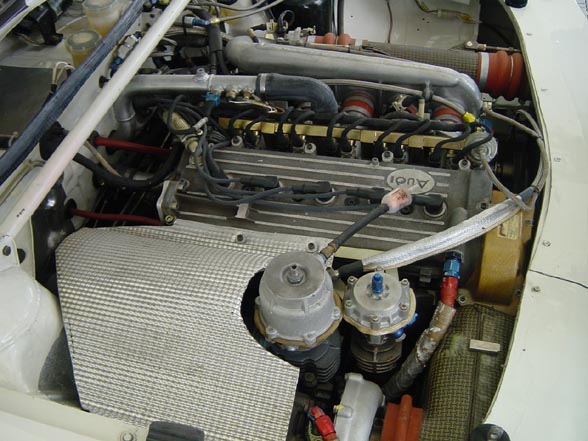 Here is a contemporary photo taken in 1987 of the setup with the heatshield removed.   This is likely how the Pike's Peak engine looked in 1987.  Notice the turbocharger brace in the contemporary picture.  Also notice this motor has dual injectors.  It has the steering pump located at the back of the exhaust camshaft.   The steering rods are straight as on all Audi rally cars and the downpipe goes between the steering and the subframe.  The subframe is lowered approximately 2" to allow for more suspension travel and the steering rod openings in the fender are enlarged. 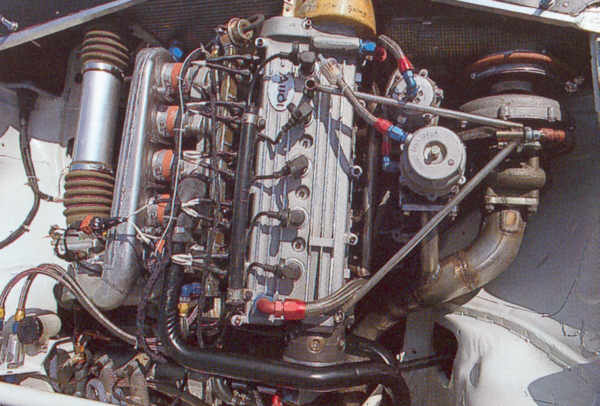 Here is a mechanic working on an Umluft setup on a S1E2 motor.  Notice the car in the background and the rally sticker which indicates 1985 1000 Lakes Rally.  Notice the turbocharger brace. 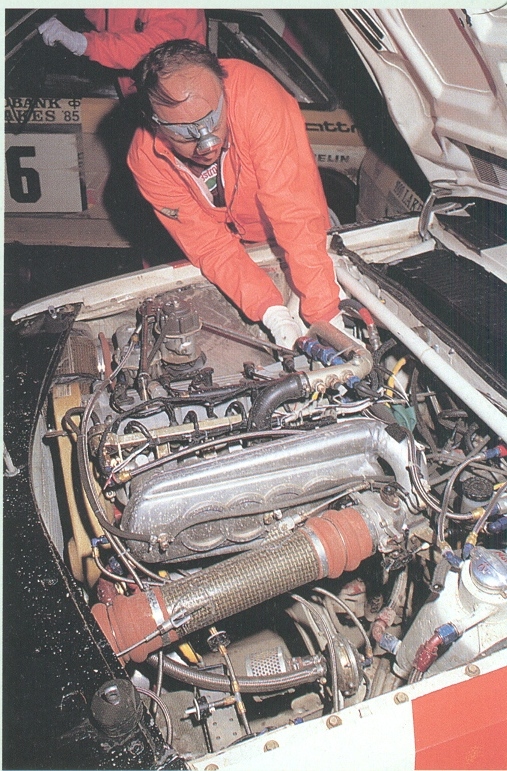 Here is the Umluft manifold setup which I purchased.  The Umluft setup you are looking at was used in the 1985 Pike's Peak Trials In conjunction with two turbos which were K29/K27#9 hybrids (3450). The set passed to a mechanic and then to Ned Ritchie from whom I acquired the manifolds, wastegates and turbos for use in my car if possible.   The main wastegate from a Porsche 930 pretty much does exactly what a standard wastegate does. Nothing special about that, except its size. The spring in the 930 wastegate without any boost control limits boost to 1.5 Bar. Its a nice wastegate for high performance Audis, and I can see why Audisport went to that instead of the stock Audi wastegate. 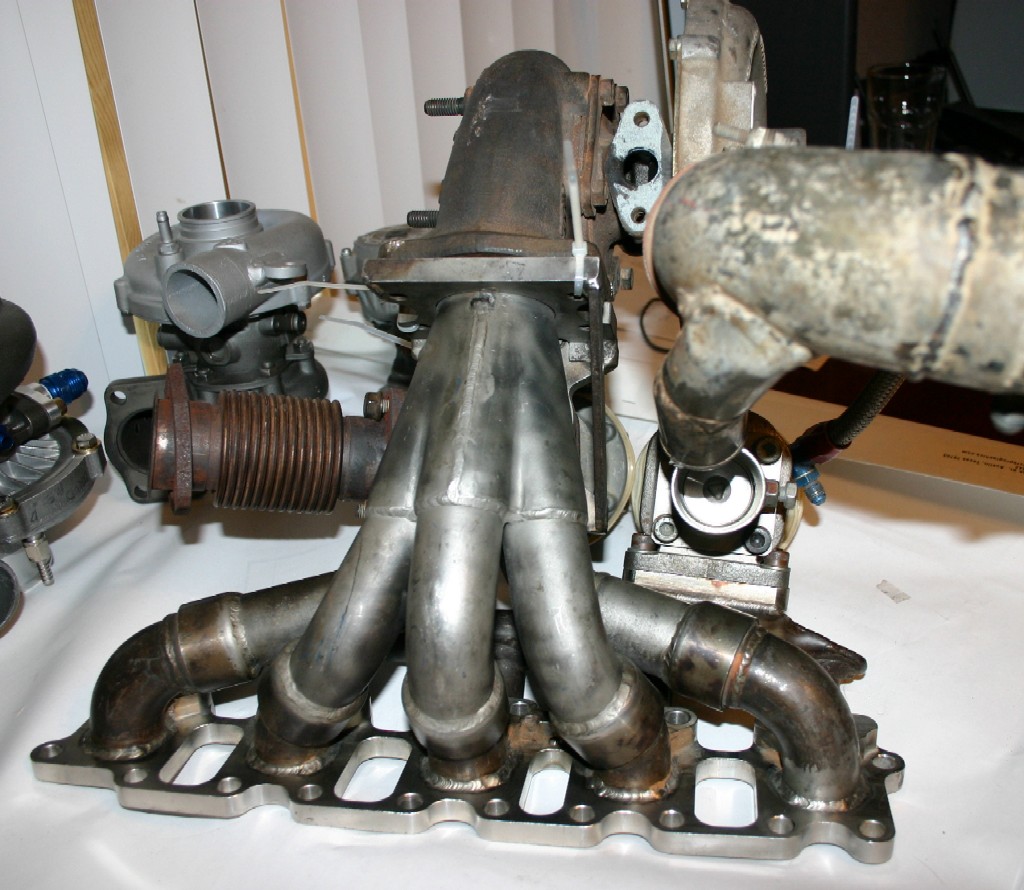 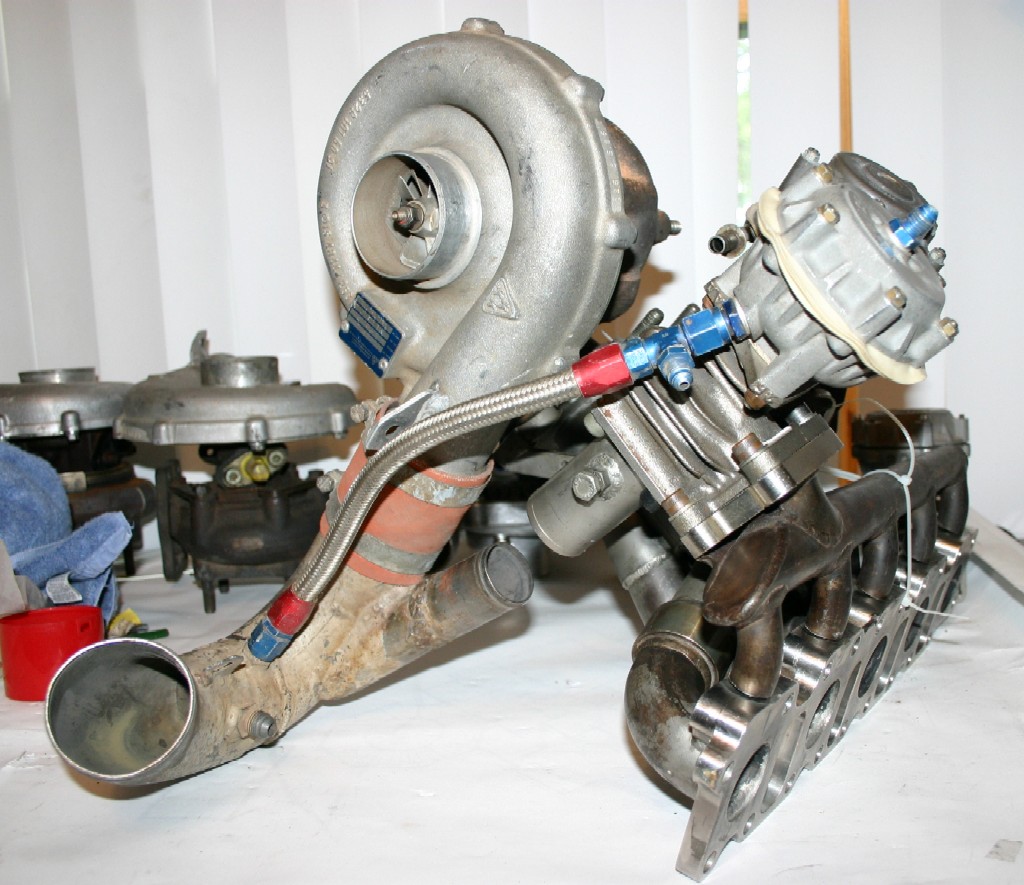 I don't have the 2nd wastegate (which is from a Porshce 944) hooked up to anything at the moment. This 2nd wastegate has the words "Porsche" removed via grinding from the top cover of the wastegate. The date is etched into the top as well and it says 6/5/1985. The exhaust manifold is vented into the piggybacked manifold at the mounting flange which is so thickened to allow for vent pipes up into the piggybacked manifold. At the moment, the manifold is fully functional, but I have installed a solid copper gasket at the 2nd wastegate(944) as a barrier to prevent its function. I mounted the 944 wastegate on there to hold the copper cap in place. The S1 in the Las Vegas Museum simply has a steel plate mounted to the piggyback and its blocked off.   This car is the 1986 Pike's Peak car driven by Unser. 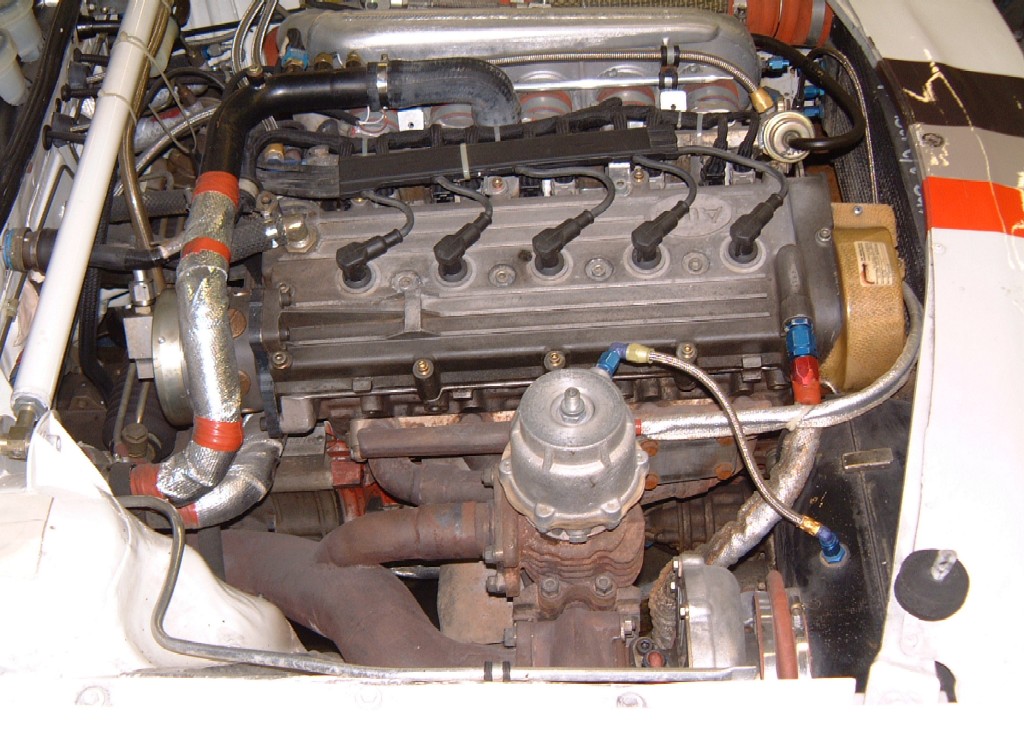 The bottom of the 2nd wastegate would connect to the U-pipe between the turbo and intercooler.
its orientation is reversed to the airflow to prevent the mass inertia of the air playing any role in prematurely opening the 944 wastegate. The vacuum lines indicate that the 2nd wastegate (944) is triggered when the air pressure in the intake exceeds a certain pressure as dictated by the wastegate spring. There also was a computer which controlled vacuum pressure to the topside of the 944 wastegate which allowed it to open during idle. If you have The World of Rally 6 book, a picture of this computer is in the Pike's Peak section and its about the size of a 17" monitor and sits in the back of the car behind the co-driver. it was coined "State of the Art computer control for 1985"

Basically the system allows intake charge air to enter the exhaust stream via the wastegate. Its controlled by vacuum pressure post TB with some other electronic vacuum control not yet determined which connects to the topside of the 944 wastegate. The wastegate will be opened at idle via vacuum pressure on the manifold or from a computer control introducing O2 in to the exhaust stream which results in a very marked increase in turbo RPMs which means more CFM airflow generated by the compressor. To prevent turbo surge the unused air that is not consumed by the engine is vented into the manifold which provides O2 gases for post combustion or a rich mix. So for example the turbocharger is always providing some very high CFM number and always rotating at high RPMs. The 944 wastegate merely dumps whatever air the engine can't consume into the hotside. The complicated part is controlling the balance between the exhaust manifold pressure and the intake manifold pressure to keep flow going in the right direction.

Described by Bruno Kreibich (2 time NA rally champ, and the guy who sold me the car), A car so equiped would idle at about 4000 rpms. Boost pressure is instant and power is fantastic with NO lag at all at any RPM. The problems encountered is that the system burns up exhaust valves and exhaust manifolds rapidly. Bruno said within an hour. So, the system isn't normally seen on any S1s anymore. And more often than not a close examination of most S1 E2s with the tubular Lehmann manifold will have the 2nd wastegate removed or the piggyback manifold removed.

The two turbos I got with the manifold had #9 K27 hotsides. Interestingly enough, I saw a picture of a #9 K27 hotside used on the Safari rally of 1982. This stamping number on the turbo was visible and this was on a 10V car which supposedly had less lag than the 20V cars. The #7 was used on the SQ which is what is on my car now. Lehmann thinks the #9 is good for racing and the #7 is too small unless I want to drive like an old man. LOL What is interesting about all this, is the choice of hotside size that was used on the various rally cars. I think the #9 on a 10V is very large; however, the picture clearly shows that this turbo was used on 10Vs. Its possible they used a larger hotside on the final version of the system to reduce exhaust temps. And since they used #9s on 10V cars(via the picture) they might have gone even larger on the S1s which might not have been the right thing to do. I haven't driven my car with a #9 turbo so I can't compare, but I do like the lag characteristics of the K27 #7 very much. Its not bad at all.

Could the system be made to work without destroying valves? Possibly. I havent given it a lot of thought recently. I'm happy with the turbo on the car and its lag characterisitics. According to a few SQ owners they get full boost around 4K and that's about where I'm at with my setup. The RS2 with the #6 was making boost by 3300 rpm or so. Very decent. Lehmann says the #9 is about 500 rpm later so I would expect around 4500 rpm. The #11s and #13s which might have been used on the 20V rally cars would push that to 5K or higher which would validate the complaints the drivers made on the lag characteristics when the power got that high. After all, they were using K27 #9s on the 10Vs! so stepping up to the #11 and #13s must have really pushed the envelope of lag. However, this anti-lag system could possibly work to remedy that if a large hotside is used to control temps and pressures.

I bought the stuff from Ned Ritchie. The manifold holes had been plugged and the piggyback was detached. The wastegates were functional. The manifold itself had numerous hairline cracks and was slightly warped on most flanges. It had been repaired in the past already. Surely a sign of very high heat and possibly dabilatating the manifold for good. I took it to a master welder and machinist. In the end, I decided to at least attempt to repair the manifold and put it back together like it was supposed to be. Over the course of a day he was able to slowly weld up the cracks with some very fine and long pencil TIG attachments. We were also jetting argon on the inside of the manifold. We tried not to use filler rod, cause the metallurgy on the manifold was definately an exotic alloy. I had the surfaces decked and so far it looks okay but I haven't stressed it too much. I want to complete the brace down to the motor mount before I go much further. The two turbos are dated 6-5-85 and are 3 and 4 from a run of 15. They were K27 #9 hotsides with a 3450 compressor wheel in a K29 housing. If I recall, a mechanic who worked on the 85 pike's peak car got these damaged parts as partial payment. They were used on test runs up the hill. I think Ned got them via barter for his services as well.

Clearly it has issued because every single S1 i have seen with this manifold has the system disabled. So, Its an interesting system, but as built in 1985 not easy on the motor. And studying it might have some merits with the availability of today's sophisticated, quick and cheap computers. The concept might actually be sound in principle, but flawed in Audi's execution. I think the net result is closely achieved with modern anti-lag software and a BPV. Not quite as powerful because the Audi system by description produced 1.5 bar of boost immediately.

Lewandowski's book shows many pictures of a dual wastegate motor for the RE20 pike's peak car driven by Rohrl. Termed "Air recirculation" in the book. Rohrl hit sixth gear after 200m from the start and hit the switch to start "Air recirculation and Air injection". I'll let you guys figure out what they meant.