These are DOT approved, street legal with hopefully enough performance to work as a track tire.  We'll see.  But anyways.  I got 3 tires on Thursday and 1 on Friday.?.?   Had the Local Audi Dealership mount them by removing the 225/50R15s I had stretched on there.  I'll move those 225s to my 15x8 ronals.

So here they are before and after mounting.  Very appropriate to the rim and period correct.   They're V rated.  Seems like they should be Z, but only way I'm getting my short geared car that fast is to drive it off a cliff. 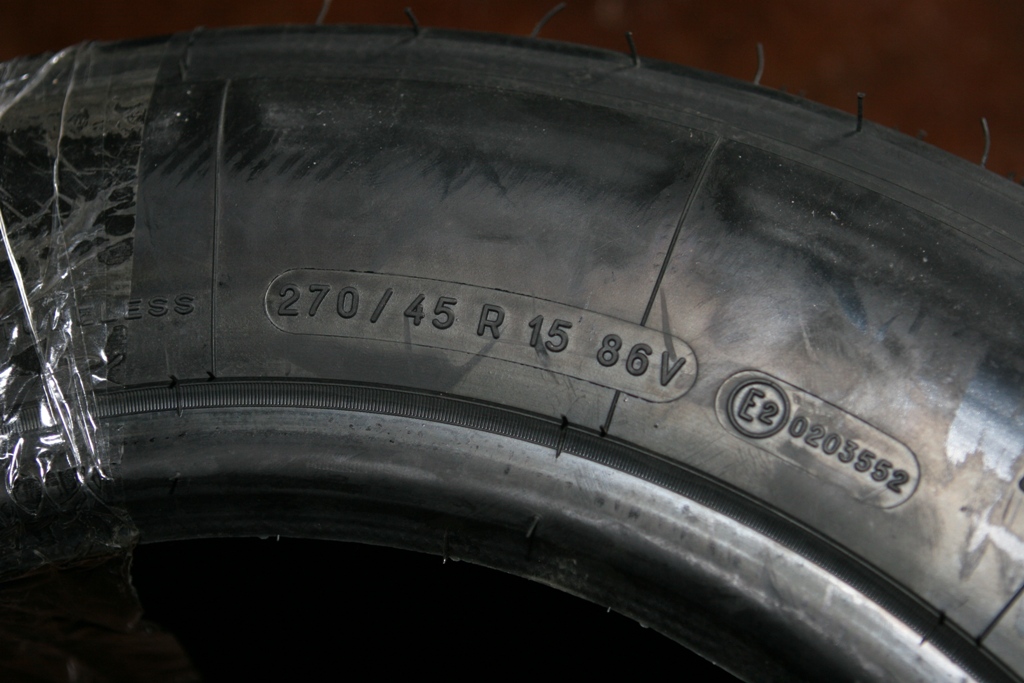 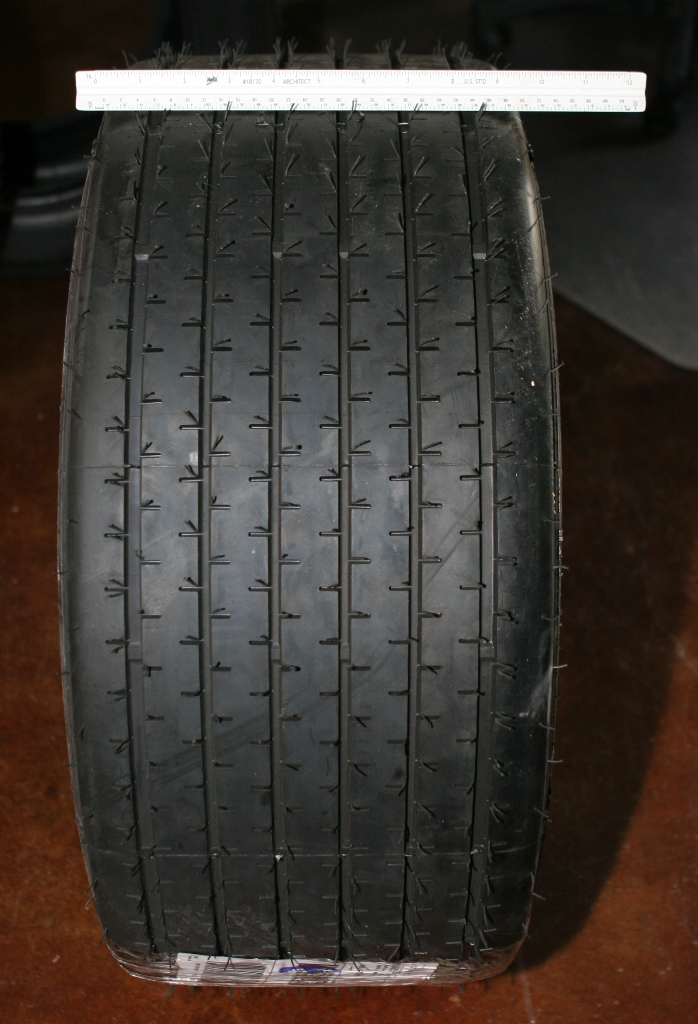 Tire height is a bit taller, but should drop once mounted.  This could be an issue and certainly might make this a problem on a stock Sport Quattro.  The Sport Quattro had 245/35R15s which makes the height much closer to 24".  A full 1" shorter. 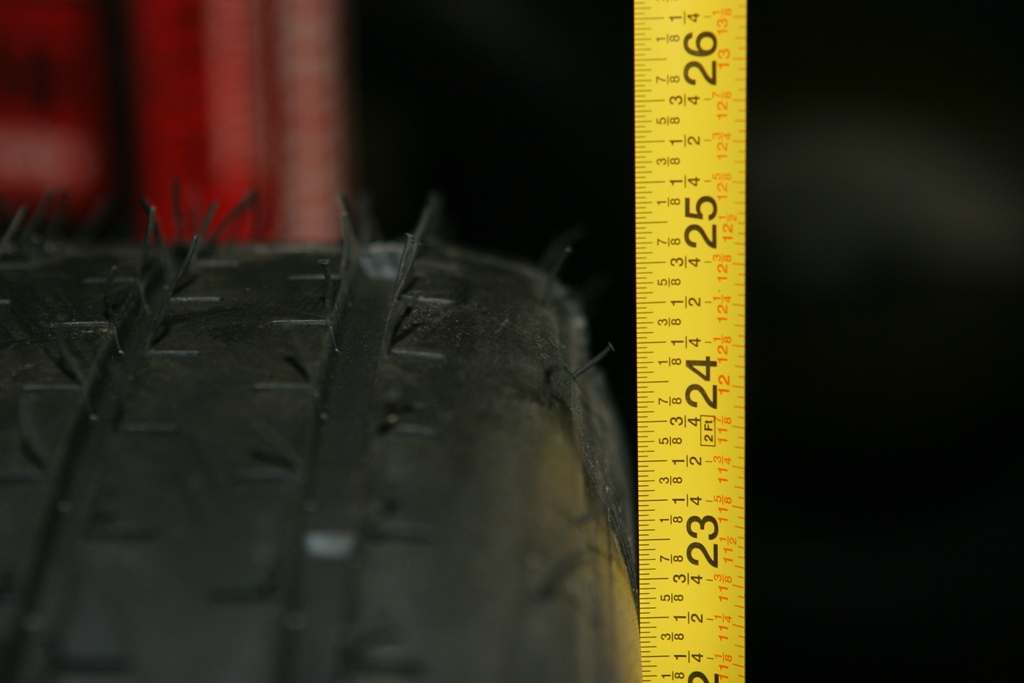 Looks fine from the front. 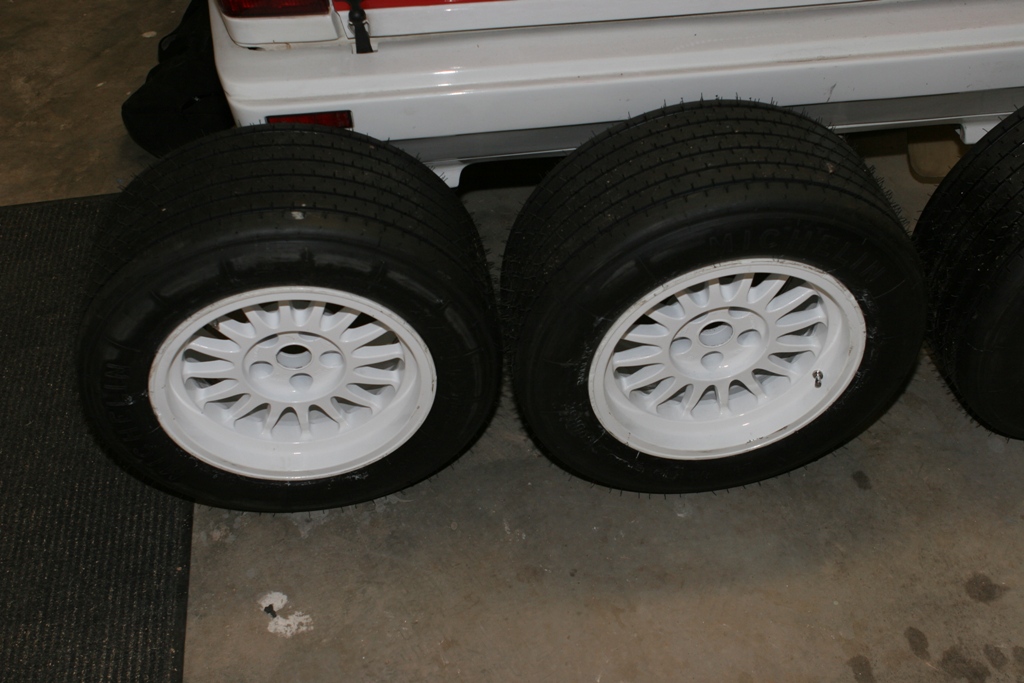 And looks just fine from the side, No stretching, Very appropriate looking for the rim. 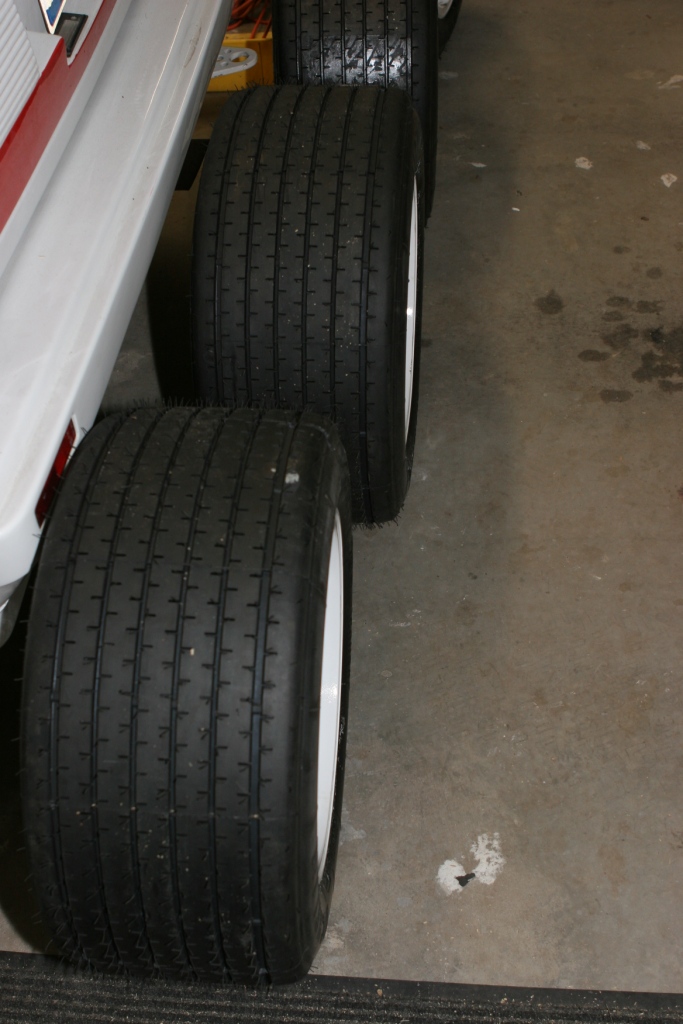 So how do they look on the car?  Well that stick out of course.  Where the 225s rolled back in these are square shouldered and protrude wider than the rim, so overall its about 1" to 1.25" beyond the fender.   Meaning I now have to install those Fender Flares I got from AM Cars across the Pond earlier than expected. 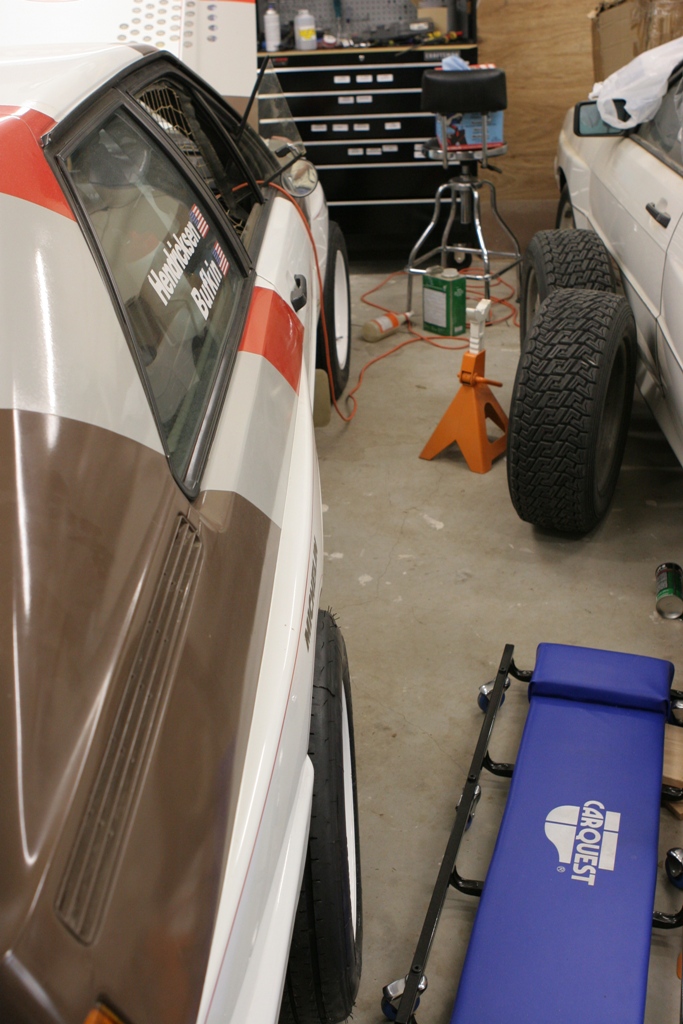 So after debating this awhile.  Cut fenders wide tires or leave fenders narrow tires.  I decided to cut fenders and install the flares.  This means shaving and trimming some rally parts and many urquattro owners would shreik about.  Here is why, On the rear tires.  The most offending bit is that rear bumper where it comes in and touches the fender.  My car still has metal rear sides, so that's no big deal to cut that, but cutting the kevlar rear bumper is another thing.   Also on the front I have kevlar front fenders and a kevlar front bumper.  Both those need to be trimmed and shaved to install the flares.   Talking to Hanlon about it, he mentioned all the Audisport handiwork he has seen looks like they chopped at the car with tin snips.   A serious hack job from all descriptions.  Overall a pretty ragged job, which makes wonder why.  I'll try to be nice, but I think I'm mimicking Audisport here and doing a stop-gap measure to run wide tires under a deadline.  Meaning, there is a reason you don't see too many of these rally cars with this Group4 look.  Its not too well implemented in actual practice.  looks good, but not friendly on the rest of the body panels.   Funny it was implemented in late 81 and run through the 82 season.  Mid 82, they were trying the new A2 with the big blistered flares.   If I were to go to Group B wide flares of which I have 2 full sets for this car, but aren't painted.  none of what I am doing isn't reversible because alot of the bumper is covered front and rear by the flares and the bumpers would have to be trimmed back even more because they'd show and stick out like a sore thumb from under the wide blistered flares.    So bottom line, has to be done either way.  Gotta chop for the Group 4 look and have to chop even more for the Group B look.

So yeah, basically looking at photos from the Audi museum.  The front fender is  higher than the rear.  They're held on by 7 rivets each.    To fit both involves removing about 1.5" of fender on the front and rear.  It also means trimming down into the edges of the bumpers.  Especially on the rear where that particular spot is so close on many urquattros.  The inner rear liner is essentially removed up to the portion visible from inside the car.   Looking at this picture, for test fitting, I dropped my coilovers all the way down to absolutely as low as they'll go.   Front is fine with no possible rub as I have almost 3" of travel, but I need to raise the rear about 1/2" and put some rake on the car to get about 3" of comfortable rear travel. 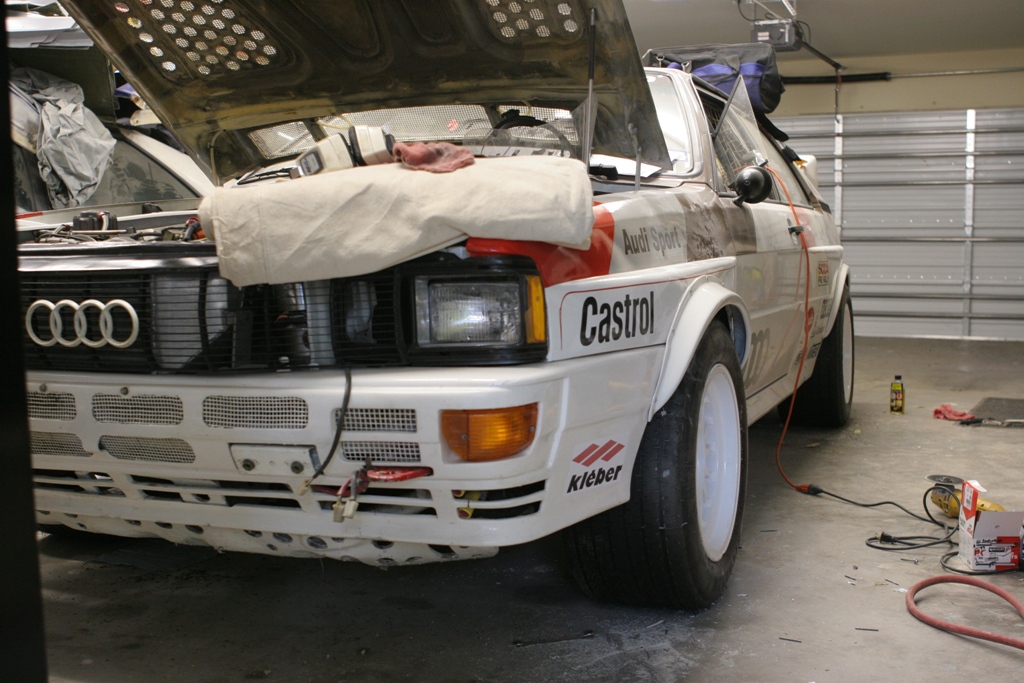 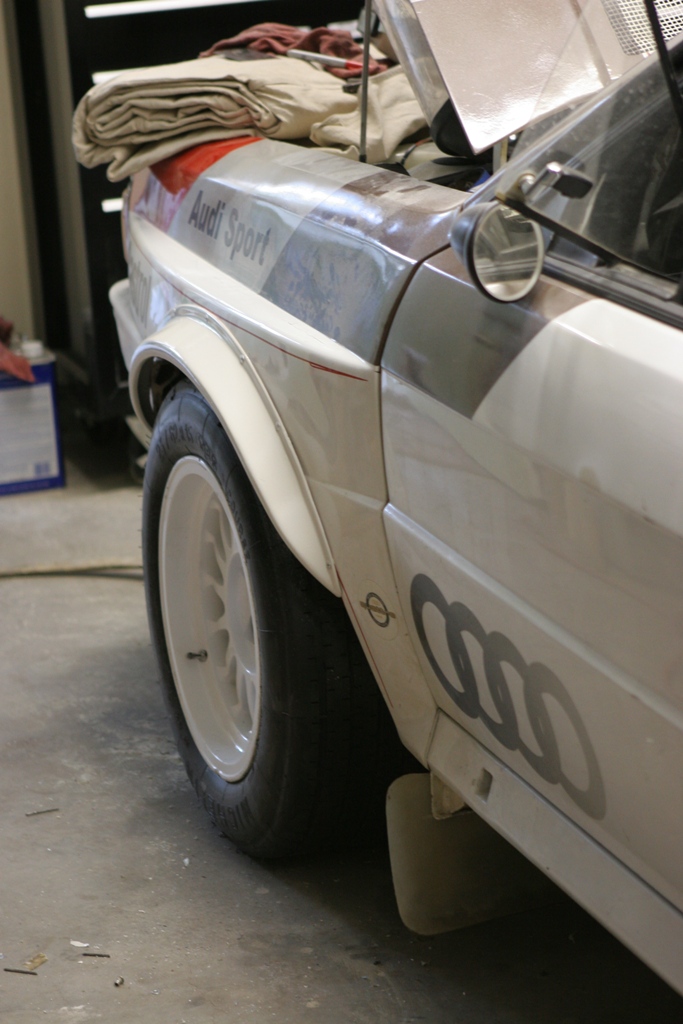 And the critical rear tire.  Most likely to rub right there where the wider bumper comes into the flare. 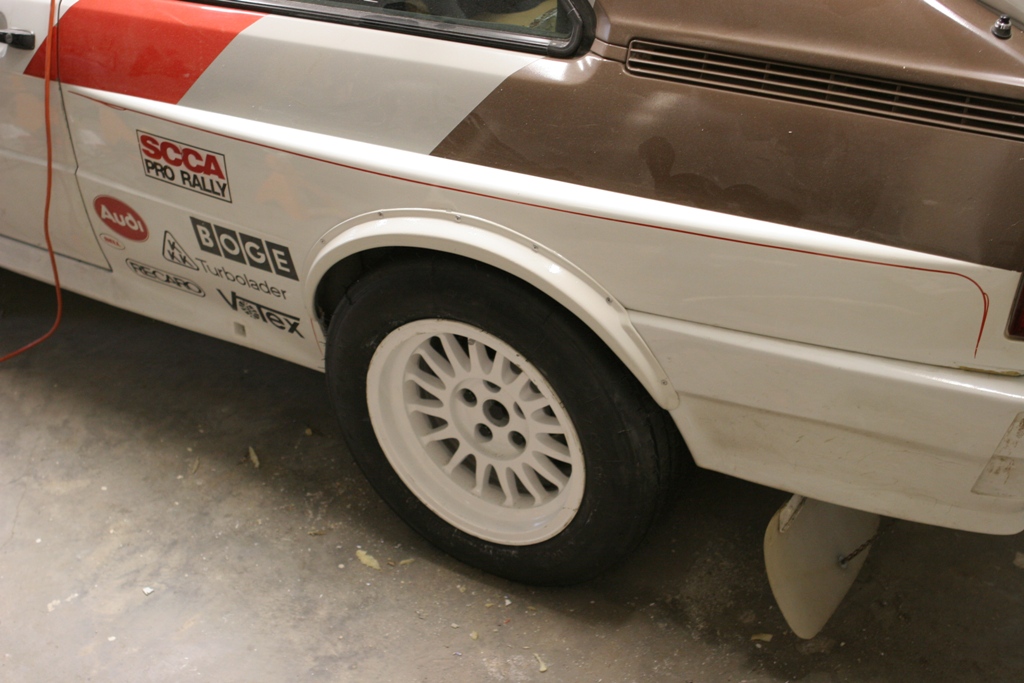