The 20V engine spews a shit load of oil around. My car is running a wet sump and I haven't gotten around to converting it to dry sump, and I probably won't because of the expense and the use of the car. But maybe one day.  So in the interim, the challenge is how to vent the crankcase, separate the oil from the vapor and then drain the oil back into the engine.   And of course, do this in a compact and efficient manner.  Objectives will be to keep the system looking as original to the car as possible.   Keep spent air out of the intake path.  Keep oily spew out of the engine bay.  Keep the vent system on the passenger side away from hot things.

So I've been trying out different crankcase breather setups and arrangements over the past 6 months and after about 4 different setups I think this is the culmination of all that trial and error. I've used a straight catch can (one chamber) mounted high with a drain back to the block which was horrible. Then tried filling the catch can with steel wool which didn't help. Then I moved the catch can with steel wool to a slightly higher position behind the radiator but that still overflowed. Then I changed the plumbing by adding a one way valve to the drain line, but that also didn't work. So I was apparently getting a great deal of oil slosh up in the valve cover area.

So I bought a vortex type oil-air separator from Aircraft Spruce. This is the round hollow type, a decent design but doesn't really allow the air to condense because its hollow. I mounted it to the driver-side by the firewall and then put my catch can up front in front of the radiator. This helped a great deal and I was able to do about 20 minutes of hard driving before the catch was full.  This was at the MJM event.   I wasn't draining the catch can in this case, but the oil separator was doing an okay job but perhaps could be better situated and a better design.  So the question was why did this setup fail?   I think it was because of the amount of oil coming up through the head and back down the cam cover vent line.  The oil system on the Audi I5 is very strong.  Very high oil pressures with squirters and alot of oil moving up through the head for the lifters.  Its just flying everywhere.   The second thing is there is a ball on the side of the engine block where the hoses hook up.  This is the crankcase vent.  Well the tilt of the engine and the nature of the ball tend to produce a flat spot where oil can sit.  This leads to vent air pushing this oil up the line creating a hydraulic jump.   And of course, the vortex separator is hollow not slowing down the vent gases or allowing time to condensate.

So I decided to make my own catch can as everyone I've seen on the market is the wrong size and doesn't have AN fittings. I like the M20 design and as this is an oil-air separator I don't mind mounting it on the passenger side of the engine bay where its hot. And I am thinking I can eliminate alot of slosh by tapping the valve cover like the 10V rally cars which is top center. The 10V rally cars also have an aluminum plate bolted behind this vent to deflect liquid oil. This is an ideal spot as its high and center.   Alot of slinging oil with deflect off the sides of the cam cover.  So this layout has gravity working in my favor.    I'll still run the rear drain from the valve cover back to the crankcase. This also allows the crankcase to vent up to the valve cover.

From there I'll position the separator on the firewall up high. The drain will go behind the engine and tie into the oilpan with a flap valve to prevent backward flow. The air vent will run around the engine to the catch can mounted up front for now.

So here is the plan showing the cutaway of the separator and the proposed layout of the system.

The separator is three cylinders of aluminum. The outer is the casing, then there is an intermediate deflector, and then inside that is a drain pipe. So vent gases hit the separator up high at a tangent to the cylinder.  This creates a downward spiraling jet of oil and air, during which the idea is the oil will stick to the walls of the can.   The stuffing will help this process by intercepting oil particles suspended in the air.   At the bottom of the can, the oil drain happens.    This runs back to the oilpan and has to pass through a Flap valve close to the engine.   I located the flap valve close to the bottom as it would assuredly open if there is a column of oil standing on top of the valve waiting to drain to counter the internal crankcase pressure.   The de-oiled air then continues upward through the middle passage and continues to be bled of finer suspended oil particles.   This design effectively doubles the length of the can, provides cooling around the outer shell for condensation,  and its full of coarse steel wool and that heavy grey scotch-brite pad.

So today I built the seperator.   Im running an An12 line from the cam cover to the can.  The vent line is at the highest point of the engine and the most ideal spot for sourcing as its top dead center of the cam cover.  This alone will help immensely. 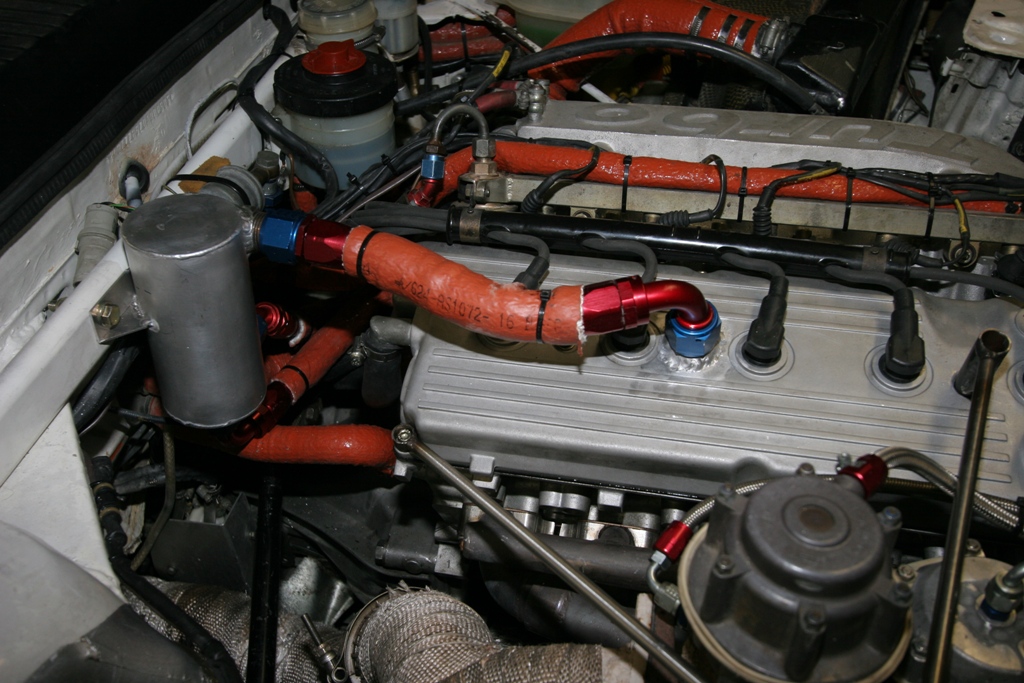 Here it is mounted to the strut brace

The whole engine now.  The catch can is a standard unit and its mounted in front of the radiator.  It'll hold about 500ml of oil.  After running for 20+ minutes the only thing in the catch can is a bit of watery oil.  A very thin mix of water vapor kicked out of the crankcase which was too hot to condense.  Honestly, these are exact things  you don't want lingering around in the crankcase which is why on a street vehicle the crankcase should be vented by vacuum pressure drawn from the intake.   However, with frequent oil changes a race car can tolerate these issues.  I'm still concerned about oil starvation in cornering so a dry sump might in the future. 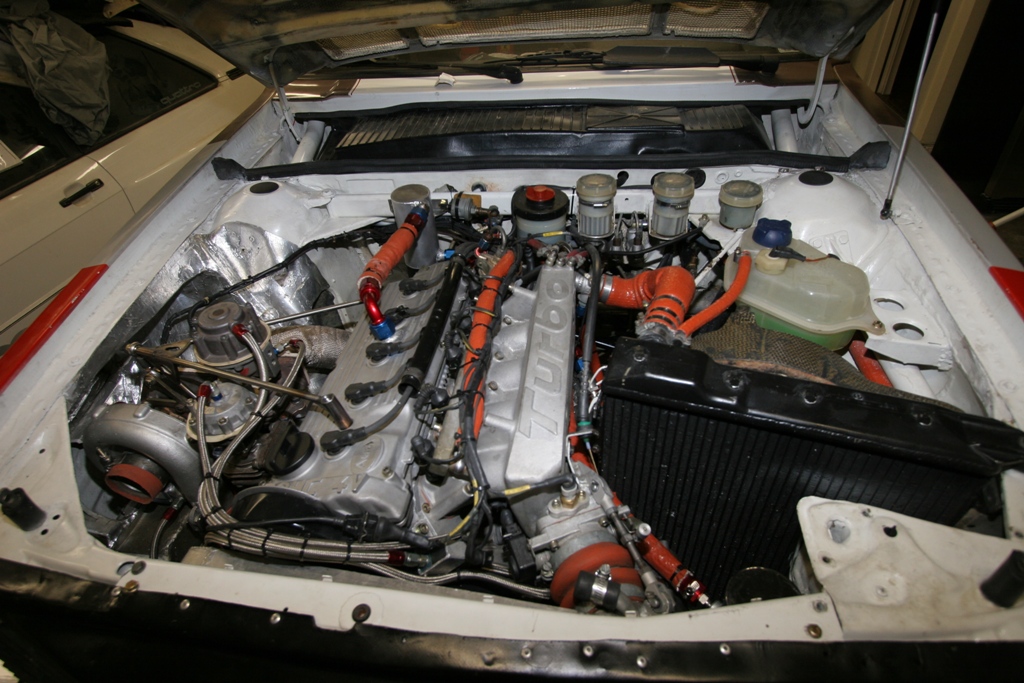 And the one way valve mounted on the drain line. 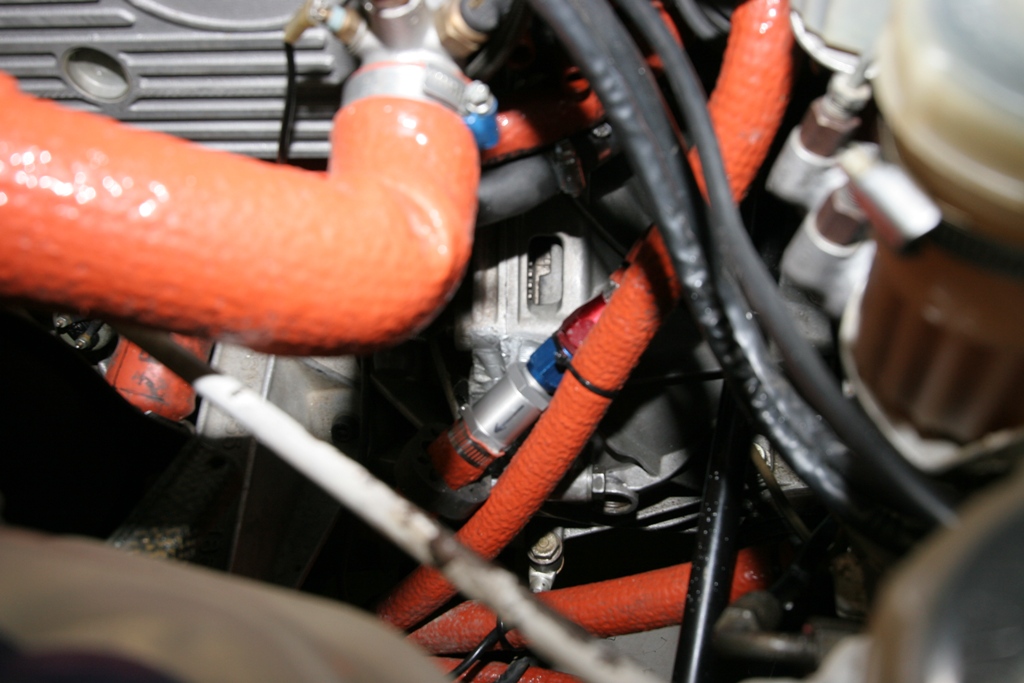