Javad arrived in Austin Friday night and we had a late dinner at a nice 24 hour cafe in Austin. Saturday morning we went to start the car adn javad noticed that we weren't getting a reliable RPM crank trigger signal. We have 5 good guys working on the car yesterday morning and it was a good cadre of old school Audi guys. We had the Fluhr brothers. Ken and Eric fluhr who live and breath Old school Audis. Ken was the main hired pro on my car to assist in all means and manners to get it put back together. Jimmy Pribble was there. Yes, THE Jimmy Pribble. (sorry Jimmy I couldn't resist the running joke). Javad Shadzi was there. Yes, THE Javad Shadzi. LOL. And myself.

Eric being an electrical engineer and known wiring guru was looking at the ECU plugs. Javad went into the ECU itself to clean the pins and was watching us tweak the crank sensor to the Nth 100th of an inch to get the signal right. We had just a slight wobble in the crank pulley, which might of effected the signal. But, eventually from one or perhaps all of the above efforts, we got a steady 59 teeth signal and things got better from that point quickly. We had to change spark plugs again from all the previous cranking, but after a good cleaning we were back to reliable starting, smooth idle, and no load throttle and acceleration. So, it was time to button it up and take it for a drive. By this time the dyno chance was long gone. It was 1pm and the Dyno place closes at 2pm on Saturday so that was just not going to happen. I could of flexed some cash around to make it happen, but I'm glad I didn't cause things went from great to bad real quick.

Javad was masterful getting the map and throttle tuned to a very good degree very quickly. Within about 10 minutes of just tooling around some Austin streets we had (in my opinion) a very good and very fast car with good throttle response. The car is making some serious power. I didn't mess with the boost controller, but the car was making about 1.5 bar of boost with the defacto setting or possibly the wastegate. Either way from a rolling start at 3000rpm and 0 boost, it was making 1.5 bar by 4000 rpm. Very good response from such a large turbo. From 4000 to 7000 the motor was incredible and the car was scary fast. Howling like an S1 motor and making wonderful sounds. Not having a BPV or BOV when shifting rapidly is very interesting. I like the immediate surge in power when getting back on throttle. Its like a rush of compressed air blasting immediately into the engine and the effect is much more initial Pop when engaging the next gear. Accelerating from lower revs, the car makes 1.5 bar by about 3500 rpm so it seems to be ramping up just to the right of the surge line in the knee. I predicted that the compressor wheel will behave alot like a T04E/50 since its dimensionally identical, and it did. The only difference is the Larger #7 turbine and the tubular exhaust manifold had absolutly no problems spooling the wheel. EGTs were nice and low. So we weren't nearly close to the limits of what this motor will do. Javad estimated we got up to 300 at the wheels or so during that short time.

About 30 minutes into the initial test drive to map the ECU, Javad and I hear a mechanical whizzing sound. We were rolling down the highway offboost when it happened. No oil smoke, just a faint whizzing. We make a straight line back to home base. Car is running fine for the entire test drive with no heating issues or leaks so I'm happy with the build overall. We found the nut sitting inside the airbox and it just bounced around on top of the compressor. The comprssor wheel is kaput. We didn't know the damage to the housings and the precious #7 K27 turbine.

I was going to pull the turbo Sunday night preferring to talk with Javad and Jimmy about Audis, but Ken wanted to see the damage right away so everyone went back out to the garage to assess the quagmire. It was probably a good idea since we found out that the turbine side just barely scratched the inside of the housing. No real damage to the turbine or the housing. The shaft seems okay and it still spins freely with no oil leakage. The compressor wheel is definately gone and the compressor housing has some very light surface damage from the wheel. I think the housing is still good, but It might mean going to a larger trim wheel. Perhaps a 3054 instead of a 3050. We'll see. Trip to Majestic on Monday.

So its Sunday morning. Javad is heading back to California. It was a great weekend and alot was accomplished. Stuff like this is going to happen when working on such an oddball motor. Overall I'm extremely pleased with the motor before the turbo problem. Shouldn't be any problems making big sustained power with this setup

Nothing like some shadows to show the damage.  There are no chunks missing from the wheel which is very good.  I'm going to an intercooler flush, but I don't think any large pieces of aluminum broke off from the wheel.  Certainly no steel particles. 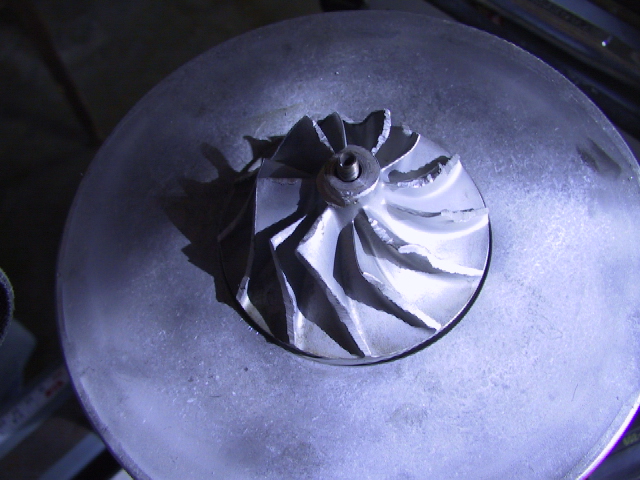 The housing.  Its mostly surface marring.  Probably only a few thousands thick. This concerns me the most. 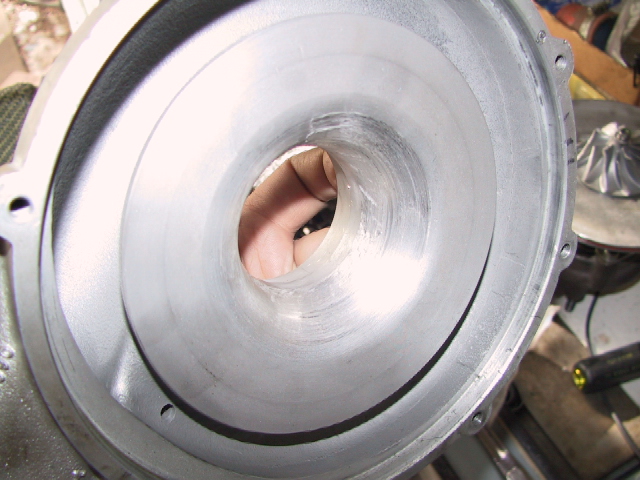 The turbine.  It looks okay, No bending just some minor abrading on the edges.  Very light. 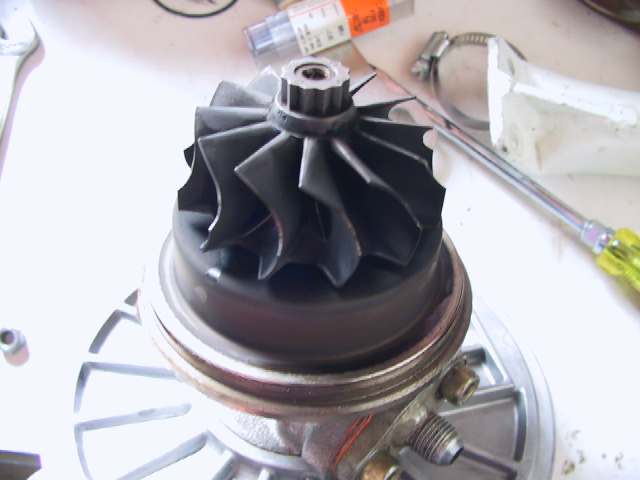 The turbine housing.  Very lightly abraded.  This is maybe 1/1000 of an inch.  No real damage. 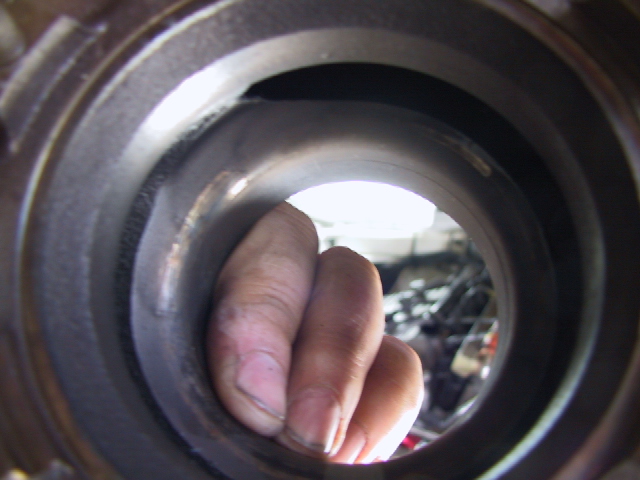 Center bearing section still functions.  Good thing we weren't on boost.   I'll get Majestic to install new bearings anyways just to be sure. 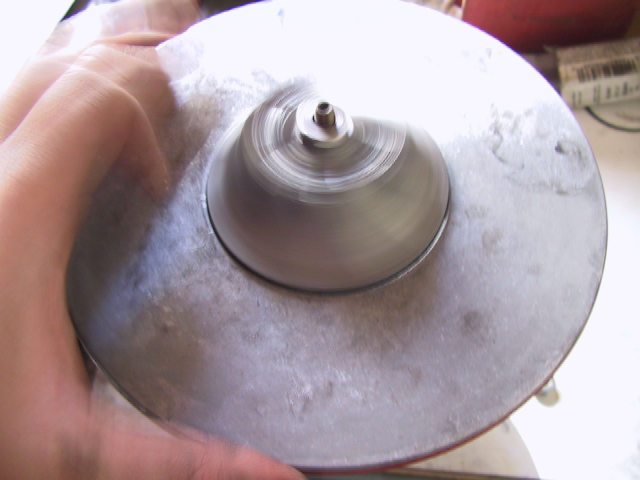 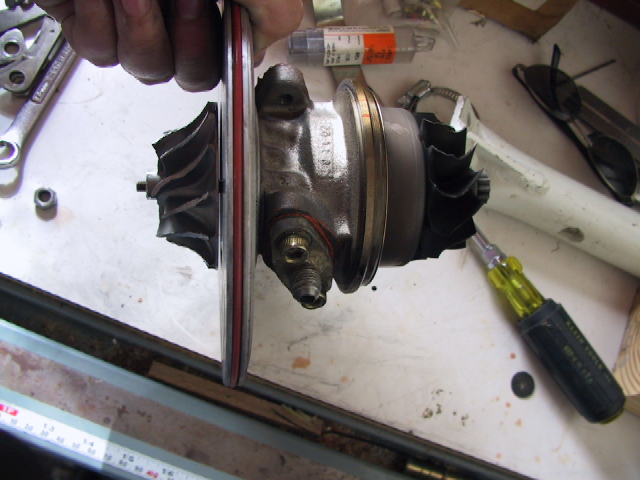